Hi Ed!  About "turn on you creative imagination" I...

HI Ali! Thank you for the detailed review of this text...

Hi Faye! Thank you! I suddenly found that I misplaced my... 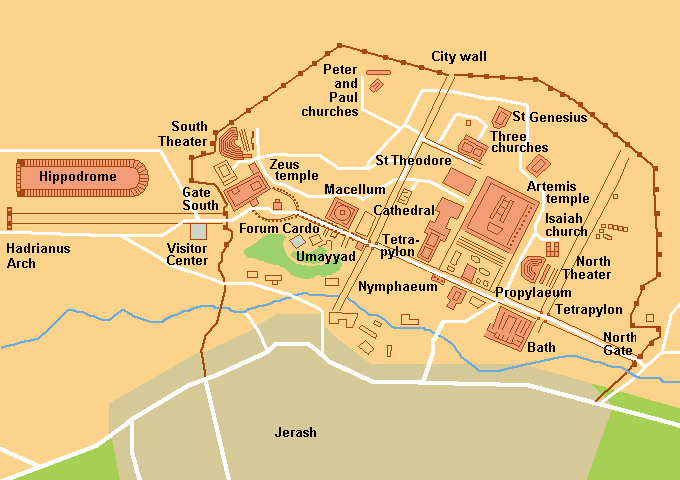 Jerash : it is a city in northern Jordan . The city is the administrative center of the Jerash governorate. It’s located 48 kilometers north of the capital city Amman .Jerash is one of the most preserved Roman architecture sites in the world outside Italy .To this day, the streets are still paved ,the bathrooms, the theaters, plazas, and arches are exceptional . Within the city’s remaining walls, archaeologists have found ruins of settlement on this site for more than 7,500 years .

The height of its prosperity reached during the time of the Romans at the beginning of the third century AD and was prosperous during the Umayyad period, but the Galilee earthquake in 749 had destroyed large areas of it, and the successive earthquakes, the most important of which was the 847 Damascus earthquake, led to additional destruction.

In 1806, the German traveler arrived in Jerash and wrote about the monuments he had seen. This drew the world's attention to it and the travelers began to visit them. The ancient city was unearthed by a series of excavations that began from 1925 to the present day.

The Greeks called it Gerasa, as well as the Romans, then the Arabs renamed it Jerash.

Almost all the population are Arabs, the majority of whom are Muslims, with a minority of Christianity, there are ethnicities in very few proportions such as Kurds, Armenians, Circassians.

Jerash occupies the second place after Petra in the list of favorite places to visit in Jordan and is considered an integrated archeological city. 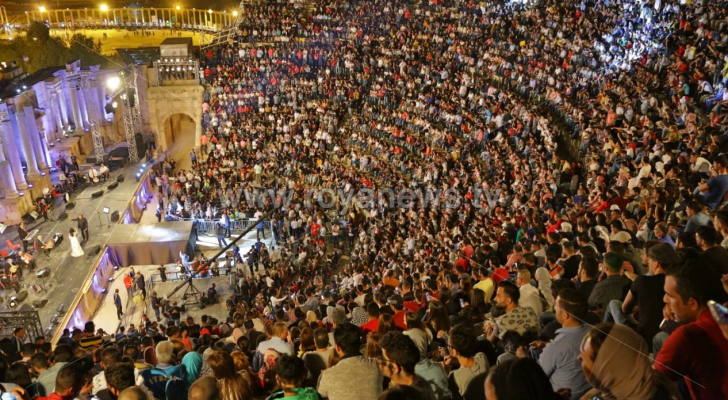 The festival is held in the city in July every year to turn the ancient city into one of the most populous and cultural cities. The festival is characterized by folkloric dance performances by international and local bands, ballet dances, musical and poetry evenings, plays, opera performances and lyrical evenings, in addition to the sales of traditional handicrafts.

which is the main poet in the ancient city of Jerash, has a length of 800 meters and includes 1,000 columns 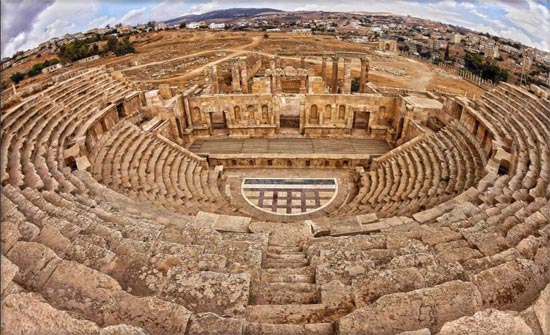 is the largest theater in the city of Jerash, with a capacity for about 3,000-5,000 spectators, as it is designed to fit the audio system in all its corners. It is also used to this day in cultural and artistic events such as the Jerash Festival.

seats about 3,000 spectators and was also designed to fit the audio system in all its corners, and it is still used to this day in cultural and artistic events such as the Jerash Festival. 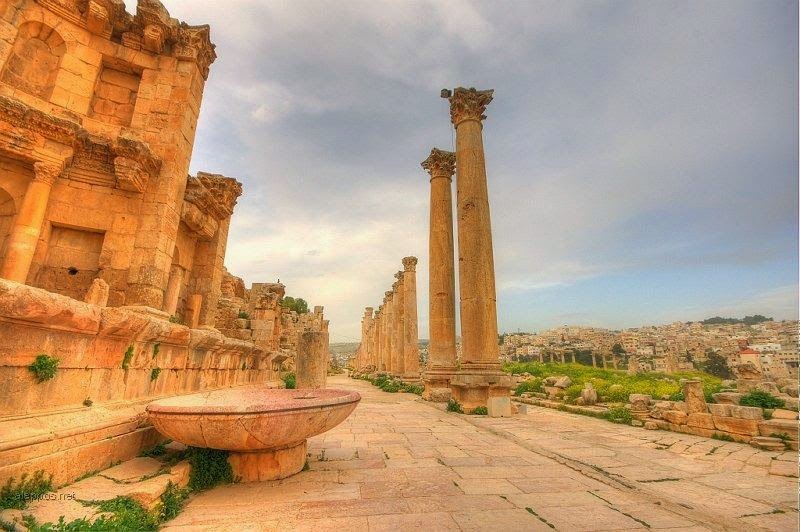 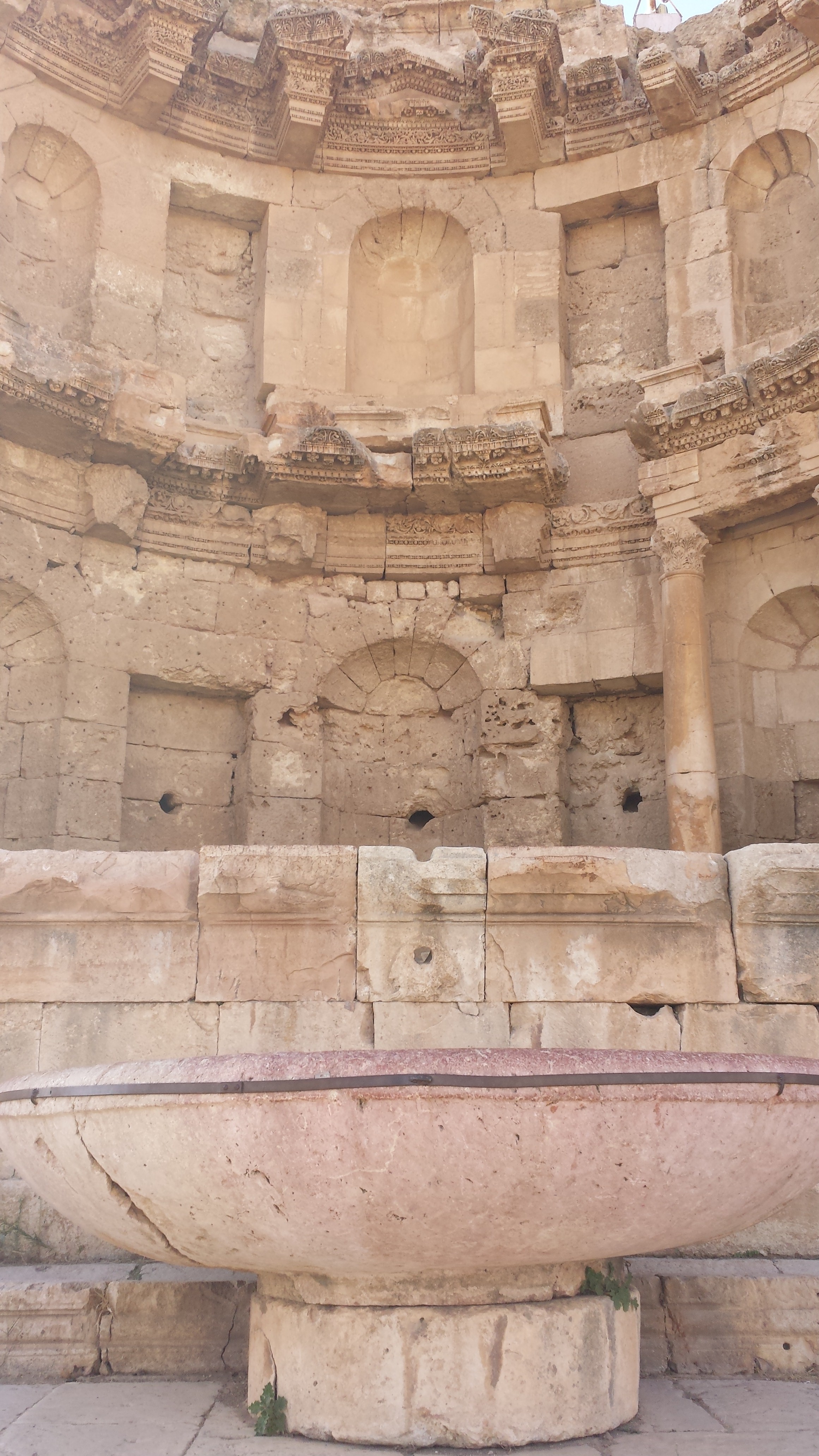 is a building that includes water fountains erected for the nymphs of water in the late second century AD and is still known as the Nymphium that evokes the imaginations of the visitor and the tourist.

is the Arc of Victory is one of the most famous landmarks of the city of Jerash is located in the southern front of the city and is a gate with 3 arches, the current height of 11 meters was erected to celebrate the visit of the Roman Emperor Hadrian to the city in the winter 129 - 130 AD

6)The Temple of Artemis is  The Temple of the Gods Guarding the City, which was built in the second century AD and is one of the best historical monuments of Jerash.

This picture is Seminar Square or they call it oval forum

But Jerash is much more beautiful than the pictures

Hope you love it.

Great text about Jerash. Your text really brings light to this great city that would love to visit. I've included just a few suggestions for your text. Great job!

To this day, the streets are still paved. Even the bathrooms, the theaters, plazas, and arches are exceptional.

Break up this sentence. The height of its prosperity reached during the time of the Romans at the beginning of the third century AD. It was prosperous during the Umayyad period, but the Galilee earthquake in 749 had destroyed large areas of it. There were successive earthquakes, and the most important of which was the 847 Damascus earthquake, led to additional destruction.

and sorry for being late to replay

Jerash looks like an amazing city. I am really interested in Roman history, so I would love to go there. From looking at the pictures, the buildings have been so well preserved. Do many tourists go there? It's funny as I read a lot of articles about historical cities to visit and I've never read an article about Jerash until today

The festival that is held each July sounds fantastic! Would it be best to plan a visit then, do you think?

With regards to your English, it is superb. Well done! Here are just some points I would like to make

3. Almost all the population are Arabs, the majority of whom are Muslims, with a minority of Christianity, there are ethnicities in very few proportions such as Kurds, Armenians, Circassians. - This sentence needs to be broken up. (The majority of people who live in Jerash are Arab Muslims. Christians are a minority among the population. There are also a very small number of Kurds, Armenians and Circassians. )

Hi again , thanks for correcting my article .

and sorry for being late to replay because I did a surgery in my eyes . So today I feel much better and I can open my eyes and can focus alittle bit ..

so if you see any mistakes in writing forgive me for that , I'm trying haha.

About tourists ,yes we have alot  here they came to Jordan as groups specalized people take them on tour  and tell them about customs and traditions also about food .

Here also there are alot of places that tourists can visit not just Jerash . there is downtown which is compleltly have the local flaver .

when you want to come to Jordan tell me because I want to invite you to a circassian food .

I am so glad the surgery went well

!! Having surgery (of any kind) can be risky so I am so pleased to hear it has helped you.

Your English is incredibly good - you just need to keep practicing!

Oh cool - and how much do these tours cost? In England, some tours can cost a huge amount of money. In some ways they are worth it, as the tour guides teach people so much. However many tourists simply don't have enough money to go on them.

When would you recommend me arranging a trip to Jordan? I love hot and sunny weather, so would you advise me to go in July or August? I love trying different food. Wha is Circassian food like? Tell me about it :-)

about the tours , I have never came across these people and asked them about this tours , but if I have the chance to meet someone I will definitaly ask about all the details ,and sure I will tell you . About the months June,July,and August are all  here warm , sometimes hot (they're lovely months ) the temperature is 34 celsius and  in the dogdays it sometimes reaches 40 celsius well thats all depend on the climate change .About Circassian food inahallah when I feel much better I post about it in the future .

By the way do you love garlic ? because we have a very famous dishcalled ( chips o pasta  this pronouncation is in Arabic )chips and pasta , contains of garlic .

and how is going with Arabic language ?

It is going really well thanks! I did not have time to post an audio last weekend, as some of my family members came up from London to see me again. This weekend I am plannning to post an audio here and talk more about myself in Arabic :)

oh family time my favorite  time ever ,hope you all are feeling well and enjoyed your time .well,that will be greate I 'm waiting the audio this weekend .And as I always says if you have any question don't hesitate to ask me ,okay .

Wow! Good job, Tatyana! I have always wanted to visit Jordan, I hope I will be able to do it one day. Are you from Jordan? Tell us more about it.

My fellow editors have mentioned several useful points. I would like to provide some more:

1. Try not to use contractions in writing because they sound informal.

2.  When ending a statement, put the period immediately after the last word and start the next sentence after a space. “…Amman .Jerash…” à “…Amman. Jerash…”

4. “…and it was prosperous during the Umayyad period…”

6. “…and the travelers began to visit the place…”

Keep up the good work!

yes I am from Jordan , I  was born in J ordan and Iam circassian .

I will write more About jordan more in the future ,but  I did a surgery in my eyes  so I can't see everything so when I feel  much better I will post more .

And thanks again for correcting my articale .